Options available when sorting out finances on divorce or dissolution 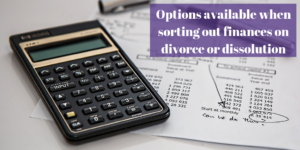 Upon separation, parties have a number of options available to them, when it comes to sorting out their finances. Within this article, we will take a brief look at the following options that some parties may wish to consider when sorting out finances on divorce:

Mediation can sometimes be a more cost-effective way of trying to sort out finances on divorce, when compared to the other options below. However, this entirely depends on the number of sessions parties end up attending, and how willing each party is to properly engage in mediation.

Here at Wendy Hopkins Family Law Practice, we are able to refer parties to mediation, if they believe that this may be the best option available to them. Whilst the aim of mediation is for parties to reach a financial settlement with the assistance of a mediator, it should be noted that some mediators are not legally qualified.

It should also be noted that any agreement reached between parties during mediation is not legally enforceable. Therefore, if parties are successful in reaching an agreement during mediation, they should instruct solicitors to prepare what is known as “consent documentation” on their behalves, which is made up of a “consent order” (setting out the agreement reach between the parties) and a “statement of information” (setting out basic financial details for each party). The consent documentation should then be filed at Court for approval. It should however also be noted that until Decree Nisi (i.e. the midway stage in divorce proceedings) has been pronounced by the Court, consent documentation cannot be approved.

It should be further noted that until a consent order has been approved by the Court, parties’ claims against each other may remain open and it is therefore extremely important that this step is not missed.

If parties do not wish to try mediation, or having done so, have been unable to reach an agreement, they may wish to instruct solicitors to undertake negotiations on their behalves. Any of our specialist Family Law solicitors are more than capable of doing this, no matter how complex the circumstances may be.

When solicitors are instructed to undertake negotiations, they will usually request financial disclosure (e.g. banks account statements, payslips, pension statements, etc.) from each party and then set down a date for the same to be exchanged. Once financial disclosure has been exchanged, parties will have an opportunity to ask each other any questions that they may have, and also the opportunity to answer any such questions.

Once financial disclosure and the replies to any questions have been exchanged, provided there is no outstanding information, each parties’ solicitor should then be in a position to advise their client as to what a fair settlement may look like in their case, and put forward settlement proposals on their behalves.

Once one party has accepted the other’s proposal, consent documentation should be prepared and filed at Court for approval. Again, any settlement reached between parties via their solicitors is not legally enforceable, until it has been approved by the Court.

In the UK, it is currently the case that unless parties have been separated for a period of two years or more, in order to obtain a divorce, one party has to apportion blame on the other (although, this may change soon). Therefore, in order to avoid this, some parties may prefer to separate for a period of two years and then apply for a divorce by consent.

As already mentioned above, although the Court cannot approve a consent order until Decree Nisi has been pronounced, some parties may still wish to sort out their finances during the two years following their separation.

In circumstances such as the above, parties may wish to attend at mediation and/or negotiate through solicitors, and then have any agreement reached, set out in a document known as a “Deed of Separation”.

Whilst a Deed of Separation is not legally binding, it can be converted into a consent order and filed at Court for approval, once divorce proceedings have been issued, and once Decree Nisi has been pronounced.

However, one of the risks involved with this option, is that either party may try going back on the terms set out in the Deed of Separation, prior to it being converted into a consent order which has been approved by the Court. In such circumstances, you should contact one of our specialist Family Law solicitors, who will be able to provide you with the necessary advice.

Under the collaborative process, which Director, Thea Hughes, is an expert in, each party appoints their own collaboratively trained lawyer and both parties and their respective lawyers all meet together to work things out face to face. Both parties will have their lawyers by their side throughout the process and so they will have their support and legal advice as they go.

Each party and their lawyer sign an agreement that commits them to trying to resolve the issues without going to Court and preventing each lawyer from representing their client in Court if the collaborative process breaks down. This means that everyone is absolutely committed to finding the best solutions by agreement, rather than through Court proceedings.

Again, if an agreement is reach during the collaborative process, in order to make the same legally binding, consent documentation should be prepared and filed at Court for approval. Otherwise, each party risks further claims being made against them by the other in the future.

If mediation and/or negotiations through solicitors are unsuccessful, or if one or more party does not wish to engage in the same, either party can file an application for a financial order at Court.

Once one party has taken the above step, they are effectively requesting that the Court decides the outcome of their case on both parties’ behalves.

Upon the Court receiving an application for a financial order, it will take steps to issue the same, make a series of initial orders and list the matter for a hearing known as a “First Appointment”.

Prior to the First Appointment, which both parties and their representatives must attend at, the parties should have exchanged financial disclosure and raised any questions that either party may have in relation to the same.

At the First Appointment, the Court will set down a date for each party to reply to the other’s questions, order the parties to obtain any expert evidence that may be necessary (e.g. a valuation report from a chartered surveyor and/or accountant, an actuarial report from a pension actuary, etc.) and set down a date for a second hearing, which is usually known as a “Financial Dispute Resolution Appointment”.

Prior to the Financial Dispute Resolution Appointment, the parties should have responded to each other’s questions, obtained any expert evidence, and put forward their respective settlement proposals. The Judge at the Financial Dispute Resolution Appointment will be an independent one, who will consider each parties’ disclosure, any expert evidence, and each parties’ offers, before giving the parties an indication as to what he/she thinks the outcome of their case may be, if the same proceeded to a “Final hearing”. Most cases settle at this stage.

The indication given by the Judge at the Financial Dispute Resolution Appointment is not binding. Therefore, if the parties do not settle at that hearing, a Final hearing will usually be listed. At a Final hearing, both parties will be cross-examined by each other’s barrister and the Judge hearing the same will decide the overall outcome of the case. The decision given by this Judge is a binding one and therefore, both parties will need to comply with the same, whether they are content with the outcome or not.

It should therefore be noted that no litigation is without risk and as a result, no solicitor can guarantee to their client what the outcome of their case may be if Court proceedings are issued.

It should also be noted that due to the increased work associated with Court proceedings, the same can sometimes mean increased costs for both parties, depending on how long the proceedings last.

As already mentioned above, whichever option parties choose to take in order to sort out their finances on divorce / separation, once a settlement has been reached, it is extremely important to obtain the Court’s approval of the same, in order to avoid future claims being made against either party. The consent order should be carefully drafted in order to ensure the agreement reached is reflected.

Filter by
Special Guardianship – What’s so “special” about it?
Alternatives to Litigation (ADR)
Can Pre-nuptial agreements be signed after marriage?
Pensions on divorce
Smacking Ban – The Impact on Family Law
Cohabitee Disputes
Can I have my inheritance early? ‘I Want It Now!’
Can Pre-nuptial agreements protect future assets?
What pre-marital arrangements to make before your happy day?
The importance of making a will at the start and end of a relationship
What is Cafcass and what does it do?
Happy Saint Valentine’s day
2019 – Private Client Update
I have received a divorce petition, what do I do?
Involving The Court In Disputes Relating To Children
How to get Divorced in England & Wales
Good Divorce Week
Summary Points of Submission to the Commission on Justice in Wales
The Extension of Civil Partnerships
The Importance of Cohabitation Agreements?
A Brief Guide to Divorce
The Importance of Making a Will
Spies, Soaps, and the Soaring cost of Dying
Collaborative Law Explained
Do grandparents have rights on family breakdowns?
Contentious Probate Overview
Children Act Proceedings and the Involvement of Cafcass
Enforcing Child Arrangements Orders
Surrogacy Questions and Answers
Divorce Day 2018
A Victorian Attitude to Dying?
The Future of Divorce Law
A layman’s guide to injunctions
Coping with Christmas Family Arrangements
Special Contributions – Have you got the XFactor?
Social Media in Family Law Proceedings
Will writing Proposals: A change is gonna’ come
Internal Relocation with Children
FAQs: Child matters over the summer school holiday
Shariah issues in Pakistani TV dramas
Child Arrangements Over Summer
A Reasonable Inheritance
The American Patient
Differences between solicitors and barristers
The Blame Game
Civil Partnership Equality – Nothing More. Nothing Less
World Book Day
January Blues
Civil Partnerships still exclusive for same sex couples & TOLATA
Running Your Own Cases. Cheaper, but at what Cost?
Are Prenuptial Agreements Legally Binding?
The thorny subject of legal fees in divorce proceedings
Schedule 1 of the Children Act 1989 – Not just for the “Super Rich”
Brangelina, as the dust settles
The Collaborative Route – Collaborative Law
A little nonsense now and then
Brexit and the future of family law
Child Abduction – What You Need to Know
Family Law Myths: Busted
Inheritance Tax – Family Home Allowance
Pre-marital agreements are on the rise
Surrogacy Agreements
What is your online “financial footprint” saying about you?
Adoption Support Fund
Sarah Wyburn on Equal Marriage
You need a proper Will to make sure your wishes are followed
Sarah Wyburn on new laws for separating parents
David James on child maintenance system changes
Child maintenance: parents to agree fees
Proposed pension changes and their likely impact on divorcing couples
Welsh law firm celebrates as marriage equality becomes reality
The Prest case and what the judgement means
Family Law Q&A: Clare’s Law
Family Law Q&A: Arrangements for the Children
Family Law Q&A: Quickie Divorce
Family Law Q&A: Common Law Marriage
See All News