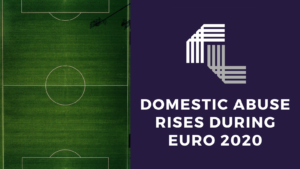 With England’s recent loss to Italy in the 2020 European Championship final on Sunday 11th July, some are feeling the negative effects of England’s loss more than others.

Many would have seen the violent scenes between fans and supporters in the lead up to and the aftermath of the game on Sunday, but there were more instances of violence that took place behind closed doors. A 2014 study from Lancaster University showed there to be an increase in domestic violence by 26% when England play a football match which increases to 38% when they lose.

This issue is one that has rightfully been gaining traction for some time now and England’s recent success has only furthered the cause. Women’s Aid and Refuge urged those who felt they were at risk of domestic abuse following the match the reach out for support prior to Sunday’s final.

With these tournaments stretching over a period of a month, and in conjunction with the World Cup due to take place next summer in 2022, it is vital victims of domestic abuse know what options are available to protect themselves.

If you are a victim of domestic abuse, it is possible to take steps to protect yourself against your partner by applying for an injunction under the Family Law Act 1996. These injunctions are as follows:

This is an application whereby you ask the Court to step in to protect yourself or your child from being harmed or threatened by the person who has abused you. There is a great deal of discretion afforded to the Court in determining what constitutes molestation, and therefore it is not a requirement to evidence only physical harm.

A Non-Molestation Order may be made for a specified period or until a further order is made.

An Occupation Order decides who can live in the family home or enter the surrounding area.

In deciding whether to grant an Occupation Order, the Court must first apply the ‘balance of harm test’ to assess the harm that would be caused to the applicant, the respondent, and any relevant child if the order were or were not to be made. The Court would then need to assess the housing needs and resources of both parties, the financial resources of both parties, the likely effect of any order and the conduct of the parties.

It is worth noting that you can apply for both a Non-Molestation Order as well as an Occupation Order at the same time. Both of these applications can also be made on what is known as a without notice basis so that your partner is not notified of the application being made. However, where possible, an application will be made on notice thereafter.

For further assistance or information in relation to applying for an injunction, please contact our office to speak to one of our family law experts who will be able to assist you in a secure and safe way.